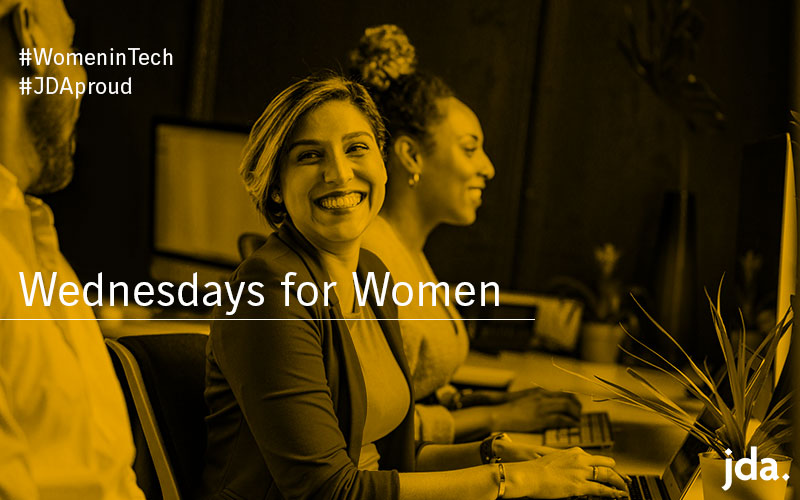 Lucy Ehlers is a senior customer executive at JDA and shares why making the leap to JDA was the biggest – and best – opportunity she has had in her career. She shares her views on the importance of harnessing self-worth, and why staying true to yourself and pushing past criticism are keys to success, personally, and professionally.

I am a single mother with a 15-year-old daughter. I live an hour outside of Johannesburg, South Africa. It is a beautiful area away from the city.

I am very fortunate to live on a largish piece of land and am able to have a fair number of cats and dogs. Spending time in nature and with animals is one of my escapes from stress.

When did you join JDA and what did you do before that?

I began work at Oracle in 1997 and stayed there for 11 years. I then worked at SAP for three years as an account manager, and Microsoft for two years in solution sales. After a short stint at PwC, I joined JDA as a customer executive in June 2017. I have worked across various industries and solutions over the years however my focus has predominantly been on supply chain and retail.

What are the favorite parts of your role?

Some of my favorite parts are seeing an opportunity come alive. From bringing in an entire team to address a customer’s needs, to building that relationship, and having that trust. Obviously, closing the deal is another favorite aspect! After that, it is gratifying to see the delivery on addressing the customer’s pain points and the value that we add to our customers, as well as the positive changes it makes to the people in their organizations once they implement our solutions.

Yes, I think we all have! The most important thing is to remember that you aren’t in this alone. Remember the strengths of your team and how they support you. Ask for advice. Never be afraid to speak to people. I’ve been lucky to have had numerous informal mentors across various areas of business and learning from those who have been there before.

Joining JDA! I just started at another company and had literally been there one day when I got a phone call from Neal Pickering (JDA recruiting). I had interactions with JDA before and fully expected to say no since I just started a new job, but the more I thought about it after having a few colleagues that had gone to work at JDA, I came around to the idea. A week later, I called Neal and said let’s go for it! Two months from my start date, I resigned!

It was a risk of course, but I really do believe in JDA as a company and I have not had the opportunity to work at a company before that has such fantastic teamwork. Its not been my experience to see people go out of their way more than at JDA. The support is phenomenal. The teamwork and spirit are superb. Even if they are under pressure workwise, they will go out of their way to point you in the right direction. It is my favorite company to work for in my career!

That’s an easy one. What other people think of you doesn’t determine your own self-worth. Especially for most women, it’s hard to juggle most aspects of work and home life.  It’s okay to keep that soft nurturing side that we have, for example. We should not change ourselves in order to be successful.

What makes a good leader?

A good listener. I read a quote recently: “A good leader is a leader that wants to see his team succeed.”

I fully agree with that. You need a leader that is supportive and uses your strengths, one that doesn’t try to make you do the work according to the way they would do it and helps you find your own strength to be a success.

What female leader do you admire and why?

Diana Spencer. She showed her innate true self in a world dominated by old traditions and hierarchy and she put her stamp on the Monarchy and made her environment her own, even in exceptionally tough circumstances. She stayed true to herself.

What advice do you have for young women seeking a career in technology?

Believe in yourself, don’t focus on negative criticism and work exceptionally hard. One belief we all have is that we need to work on our weaknesses whereas I believe we need to focus on our strengths. By doing that, we will do the best at what we are great at.

What do you think is the most significant barrier to women in leadership?

I believe there are two that are somewhat intertwined. The first is that our strengths and abilities are often underestimated.

The second is awareness. There is a continued inequality in pay and recognition between men and women and until that is right-sized, there needs to continue to be awareness spread and change made. If we’re doing the same job as men, we should receive the same compensation.

How do you maintain a work/life balance?

It is very difficult as a single mother of a 15-year-old daughter. I work hard to make sure to take the time for the special little things. Spending time with her is the most important.

How do you stay inspired professionally?

By speaking to colleagues, learning from their spirit and enthusiasm. It’s important to expose yourself to environments and people and circumstances that you would not normally encounter.

What book(s) are you reading right now?

What’s one fun fact about you?

I used to be a dancer. Contemporary Modern and ballet!