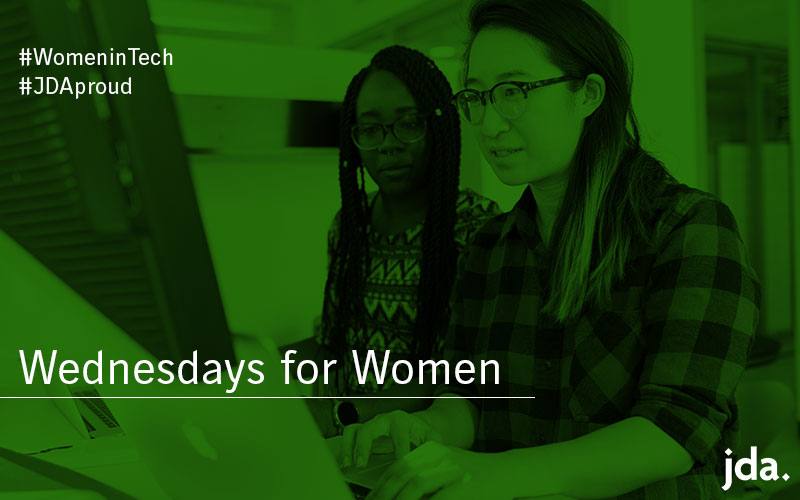 With a season of giving on the horizon, we’re sharing a special edition of Wednesdays for Women themed around “blessings in disguise.” By definition, a blessing in disguise is an idiom referring to the idea that something appearing to be a misfortune can have unexpected benefits. This week, we’re sharing some of these moments from our female leaders that make them thankful for their career journeys.

Shortly after I married my husband and moved to the states, I interviewed for an HR intern position at JDA. The role gave me exposure to a variety of topics – several policies, practices, questions and requests – which was overwhelming at the time, as everything was so new and different. The opportunity taught me so much about serving internal customers that eventually, I was offered a full-time position. Fourteen years later and I can only look back and smile at the knowledge I gained, the network I built and the memories I made.

Two years into my career, I had a manager offer me a role as a team lead. I didn’t feel right taking the role as I had to manage associates who had been with the company for much longer. My manager encouraged me and said my passion for my work was contagious and I would do well. It was the toughest role I ever had, but it was the best encouragement to get out of my comfort zone.  It taught me so much and help me realize my potential in leadership and management.

When I first interviewed with JDA in 1998, I didn’t get the job. A few months later, HR contacted me for a consulting role. I learned so much in that role, especially the importance of empathy, which has stuck with me throughout my career with both external and internal business matters. Many years and roles later, I’m still with JDA and I like to think the path I took gave me firsthand experience that led me to where I am today.

At a previous company, I managed a professional services team and was asked to run the cloud team. At first, I was nervous I didn’t know anything about the cloud, but it was one of the best decision I’ve ever made. Now, I have the responsibility of managing JDA’s move to Azure.

One of the worst jobs I’ve ever had was at a small consulting firm years ago. I didn’t like my managers, I had no resources and I was constantly getting pulled into projects that didn’t apply to my role. Stress levels were incredibly high, but it taught me I could learn to do things out of my comfort zone. About six months into the job, I left with nothing else lined up. Several weeks later, a position for a services marketing director at JDA opened up and about 10 interviews later, I got the job.

I’ve been fired from exactly one job in my life. I was a store manager, twice ranked as one of the top 50 store managers in the country with a staff I loved. I didn’t love the job anymore but was devastated when they let me go. One month after I was fired, I took a temporary position as a receptionist at JDA. Five years later and I’ve been promoted, I have a boss I absolutely love working with and I’m at a company I’m proud to work for. Being fired from that job was the best thing to happen to my career.

What about you? Have you ever been in a situation like this that turned into a blessing in disguise? Share it with us here or on Twitter!

Mind the Gap: Closing the Hunger Gap in a World of Food Waste