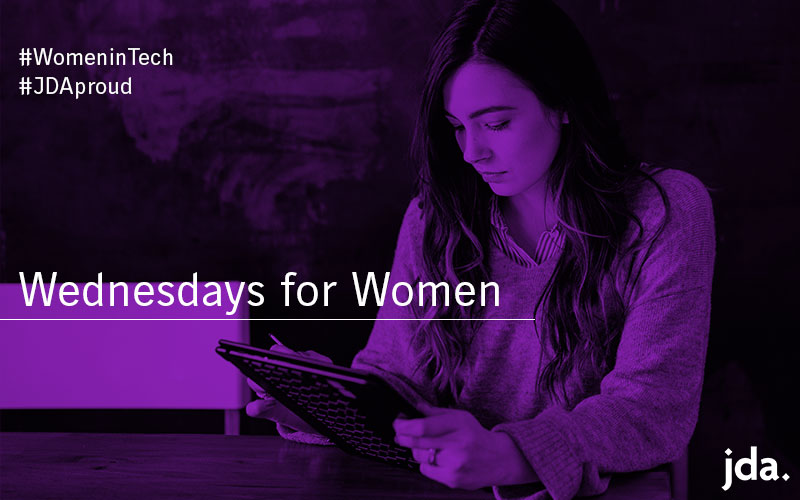 Meet Donna Gaspard, senior director of alliances at JDA, who believes listening is the most important thing a leader can do, and that authenticity is the single-most important trait we should carry within ourselves. She took a position in sales at a time she thought she’d become a lawyer, changing her career trajectory for the better. After a leap into teaching yoga full-time, she came to JDA and shares what she’s learned in her career there, and throughout her life.

I grew up in a Scituate, Mass., a small town south of Boston, known as the “Irish Riviera.” It’s an interesting story, and for me, it speaks to my Dad who grew up in Dorchester quite poor and went on to move his family to this beautiful beachside town, after graduating from Boston College and being inducted into the College Football Hall of Fame in 2011. My mom attended Boston University and married my dad.

I am Irish Lithuanian which is where my strength comes from, although I grew up incredibly shy which surprises people! I am married with a stepson and daughter-in-law, just celebrated my 10-year anniversary in April and ‘gave birth’ to my golden retriever Luna in November 2017.

If you believe people are born with a natural trade, I am a teacher, and very much a helper and perfectionist.

You’ve been at JDA for a few years. Tell us about your JDA journey

I just celebrated my three-year anniversary at JDA in March. My husband and I moved to Scottsdale four years ago and I was with a start-up company. Unfortunately, they weren’t ready to build out their partner program and I was laid off a couple of months after moving here. I am a big believer that everything happens for a reason and a purpose and it serves you. I spent a couple of months settling into my new home. A new friend who was retired from Accenture recommended I check out JDA and went on to introduce me to Wayne Usie [chief market development officer at JDA]. I walked away from that meeting thinking “if everyone at JDA is like Wayne” I want in!

I thought I would go back to direct sales as I was enjoying being closer to the customer again in my previous two start-up jobs; however, when I sat with Mark Morgan [JDA’s chief revenue officer] in Dallas, he looked at me and asked why JDA wasn’t looking at me to help support JDA partners. The helper that I am, I took the partner role.

My first year was incredibly hard as there was so much to learn and the partner program needed some structure. It felt a bit like the Wild Wild West. One motto I live by is that I can do anything for a year, and then my commitment to myself is to review if after that year, I want to continue.

I’m glad that I did, as today, JDA has a formal partner program called Partner Advantage. It is a fantastic team that supports our partners across the globe and we all support each other in every aspect of the work that we do – we are a family. There is still much more work to do, but I am committed and eager to continue to be a part of the progress.

I’ve had a few and the first happened when I graduated from college and took my first job at a small software company. I never thought that I would be in sales, but after doing computer programming, customer support and training, the president of the company pulled me into his office and said “if I die, you will be running this company and I need you to understand the sales and marketing side of the business, so which do you prefer?” I remember thinking, I don’t have any interest in either of these, but I agreed to sales.

It was the best thing that could have happened as it was very lucrative but most importantly, helped me build incredible confidence and opened a lot of doors. At the same time, I had been thinking of going to law school and after working with a lot of attorneys, I realized it was not the path for me and I enjoyed sales.

The second big shift was when I left the corporate world and discovered yoga. If you read my

blog on breathing, you’ll understand more, but the biggest lesson was that my Type A personality doesn’t define me. Yoga gave me the tools to take care of myself and to slow down. And, as the teacher that I am, allowed me to go on and to build a very successful yoga business. It also opened me up to meet my husband, which was the greatest gift of all.

It was when I decided to spend by junior year abroad in college. I was on a wait list and didn’t know I was going until two weeks before leaving. I spent eight weeks in Paris and then another eight months in Geneva, studying at the University of Geneva;  all of my courses were in French and I passed! The entire year was incredible and opened up my mind to different cultures, while giving me an appreciation for my family which to that point in my life, I can say that I took for granted.

My mom. I left my first job to move to Florida to pursue a serious relationship, which was a big decision and I remember my mom saying to me as I hugged her goodbye wondering if I was doing the right thing “Honey, you can always come home.” As simple as this sounds, it was the some of the best advice I have ever received. Family is very important to me and that gave me the comfort to know that I can go out and take risks in life, whether they are personal or professional, and I can always choose something else and my family will always be there. It’s really that simple!

That I was able to come back into the corporate world after five years away during the time I taught yoga. I thought it would be incredibly hard to re-enter, but it was the opposite. I found when people learned that I had left to follow a discovered passion, they were very supportive and eager to understand how I had the courage to do so. They also turned to me for support when they were struggling and I was delighted to teach them to ‘just breathe.’

Don’t be afraid to speak from the heart and be my authentic self. Growing up as shy as I did, I never felt comfortable in speaking up in the early part of my career.

Another big one is to listen. We have two ears and one mouth for a reason and I remember hearing that and thinking, I do that, I have always been a good listener and perhaps my shyness enabled me to learn this lesson early in my life. I am always frustrated by people who don’t listen. There is so much to learn and being present and just listening opens up so much more in relationships, both personally and professionally. Being a know-it-all doesn’t get you very far in life.

And finally, it’s so important to support people and to let them know it’s okay if they don’t want to remain in their current role. When I was a manager, I remember having many conversations with my team members who were not happy in their role or the work they were doing and I was always supportive in finding them the work they would enjoy.

Recently I read something that struck me about leadership “Leadership is not being in charge, it is about taking care of people in your charge.” This is spot on!

What do you think are biggest obstacles of gender diversity in the workplace?

I graduated from Smith College, a top all-women’s college in Northampton, Mass. I remember after returning from my junior year abroad thinking, I have got to get out of here and get to the real world!

The irony was that when I went into business, I was working with all men! So I went from the frying pan into the fire. My dad taught me how to play golf when I was eight years old, and it was one of the best things he could have done for me. I was able to bring golf to my business life and it has created a more level playing field. My experience has been that once men see that I can play their game, I have earned their respect. I have never been concerned with lack of diversity, always believing that you should hire the best person for a job. I have seen many men getting promoted over women over the course of my career when I believe a woman was better suited for the job, and this is disappointing. I am an avid supporter of young women entering the workforce and do all that I can to help them be successful.

You’ve written a blog for Wednesdays for Women on your yoga practice – how do you incorporate that into your work/life balance and finding ways to relax?

I practice every morning, before looking at my phone or turning on my computer to check email, period. This is the single best gift I can give to myself to ground myself and practice presence before starting my day. It allows me to handle things with more grace and patience, and I can always tell when I miss a day of practicing yoga. It’s not pretty!

Condoleezza Rice.  I was in a small audience listening to her speak while at SAP and I was in awe. Simply put, she is smart, sassy, calm, cool and collected and she plays golf!