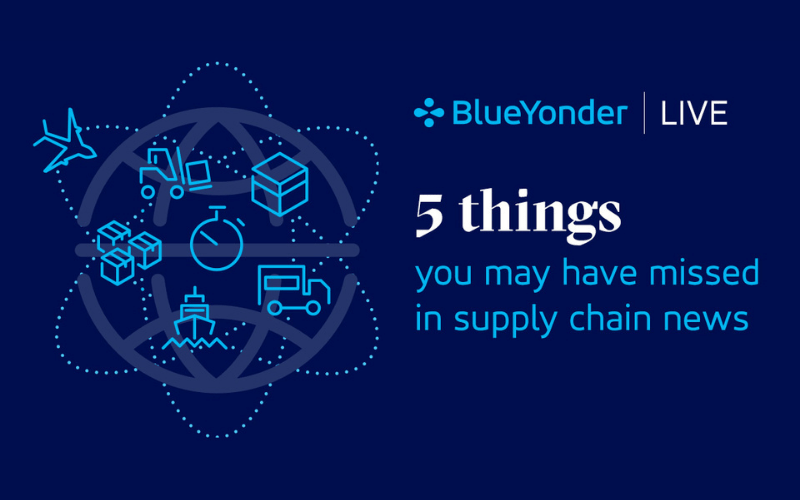 5 Weird Supply Chain Events We Only Wish Were a Joke

It’s April Fool’s Day, but the past couple of years have been no joke. So instead of a prank, we’re going to take a stroll down memory lane and share five weird supply chain events that seem unreal but actually happened. You can also catch the full rundown from our Blue Yonder Live video:

Americans were panic-buying and fighting over toilet paper

Imagine trying to explain to yourself in late 2019 that just a few short months later, Americans would be panic-buying and fighting in the store aisles for toilet paper. It would probably look a lot like this hilarious SNL skit featuring Kate McKinnon and Adele. Toilet paper was where pandemic supply chain conundrums started — and things only got weirder from there. Another weird fact: bidet sales in the U.S. soared during the great TP shortage!

We all suddenly know what a semiconductor is

2019 me had no clue what a semiconductor was. But over the past two years, if you’ve had trouble buying a new car, TV, an iPad, a mobile phone, or video games — the reason was almost certainly “the semiconductor shortage.” Why the shortage? People were staying home and buying more items made with microchips, while the countries that manufactured the chips were some of the hardest hit by COVID-19, causing massive shutdowns of manufacturing facilities. Another weird downstream impact of the semiconductor shortage is that used cars now cost 40% more than they did last year!

Americans’ concern about inflation is at a record high, with the cost of consumer goods soaring. But why? Blue Yonder’s CPG guru Shri Hariharan gave us a list of reasons. But one of the biggest factors in inflation right now is shipping container costs. Since the pandemic began, the cost of sending a shipping container went from around $2,000 up to $20,000 in just a few years, and these costs must be passed on to consumers.

Selling Girl Scout cookies is typically such a rewarding activity, with young women learning entrepreneurial skills and valuable life lessons. And it’s usually such a joy for everyone involved — the cookies practically sell themselves as consumers eagerly await the return of the beloved treats each year. But in 2022, it’s hard out there for a Girl Scout. They’re trying to navigate a pandemic like the rest of us, while also trying to explain supply chain shortages to very angry customers who might not get the cookies they were looking for, as well as shipping delays that took cookies ordered online longer to get to front doors.

Yes, another container ship got stuck

We all remember when the Ever Given got stuck in the Suez Canal in March 2021, holding up billions of dollars in global trade for nearly a week, and having an impact that lasted months. Well one year later, the same company has yet another ship stuck. The Ever Forward, ironically, has been aground in the Chesapeake Bay for two weeks, and as of today is still stuck.

Don’t let supply chain challenges make a fool out of you. Head over to blueyonder.com to learn how we can help solve all your weird supply chain issues.

Is it time to integrate your supply chain design with execution?

4 Challenges for Fresh Retailers and How AI Can Help [Video]

Blue Yonder: A Culture of Sustainability