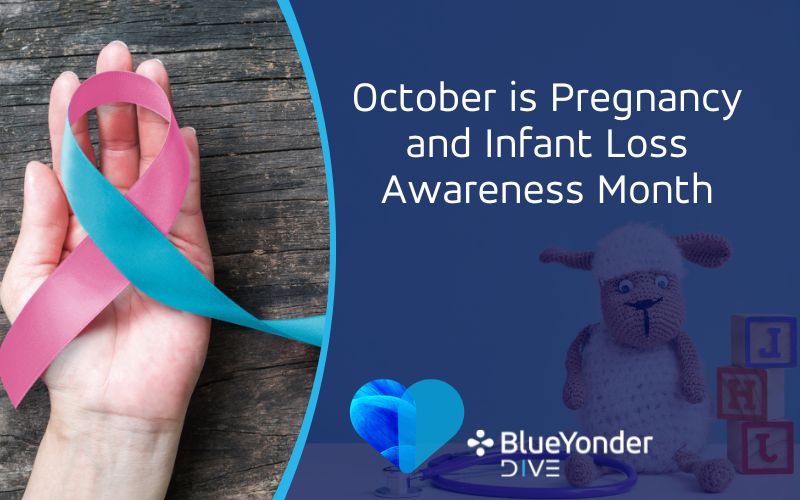 ** This blog talks about child loss and may be triggering for some people. ** October is National Pregnancy and Infant Loss Awareness Month. This month is reserved to honor and remember those who have lost a child during pregnancy or lost a child in infancy. Blue Yonder associates share their personal stories of loss and how they dealt with the grief. We hope this blog serves as a support for others who may be suffering a similar loss and an educational piece for those who know someone who was impacted by such a loss. Here’s my story:

In 2015, my husband and I were so excited – we were having our first child, a baby girl. I was so nervous to share the news but we finally made the decision to tell our extended family, friends, and work colleagues around 18 weeks. We lost our little girl, Audrey, at a little over 23 weeks. I was broken and felt so alone. I only took a week off work and didn’t know how to talk about it. There were some supportive people, some well-meaning but hurtful people (more on this below), and then there were those that were completely silent. Over the coming years I had multiple people come up to me to ask when we’d start trying for a family – again well meaning but hurtful (takeaway – please don’t ask people that).

In 2018 we had another child and she is the rainbow we needed. After she was born, a few thought that now that we had our baby, that we would move on from our loss. I would ask you – does your grief subside in losing a family member or friend, even though you may have other family or friends? I grieve Audrey still today – I always think of her – what would she have been like as a big sister? How would our two girls interact – play, fight, share? What would she have wanted to do when she got older, what would her interests have been? There will always be a hole – and sometimes that hole hurts more depending on the day. When I see butterflies, I think of her. These are the moments when I close my eyes and just breathe.

If you know someone who has faced a loss, please know that while some words are well-meaning, they can come off as hurtful. Here are a few things not to say (impact over intention):

You don’t have to say much to a person who suffered a loss. Let them know you grieve for them and that you are there for them if they need anything. Words of empathy go a long way. Speaking their name, remembering them from time to time means so much.

Audrey made an impact and continues to – even if she didn’t say a word.

These were the few words that my wife could muster when I finally managed to meet her, after arriving late….

I was torn on several levels.  Distraught that I missed the appointment and that my wife had to have the scan alone and face the news that our fetus hadn’t developed beyond 7-8 weeks (this was a 10-week scan).

She has received details of when she had to come in for a medical procedure the next day, but no support beyond that.

It was a lot to process.  Should we get a second opinion?  What if the scanner wasn’t working?

At the medical procedure pre-meeting, we spoke to the doctor and they overwhelmed us with stats. Being told that we were now more likely to have future miscarriages.

We felt a little like we were on a conveyor belt.  It happened so fast and it was a bit of a blur.

Something we learnt was not to pay too close attention to the stats. For every stat, there is an inverse. You do not necessarily adhere to the law of averages. This is something that helped me when I experienced other challenges after.

When we had found out we were expecting, we started to do little things, talk about the future, even using a pseudonym.

Miscarriage is not something I had really thought about until it happened to me recently.

We were so excited to be expecting our first baby, I had an early scan at 7 weeks and got to see the heartbeat, which really reassured us that everything was fine and we could start looking forward to our new addition. The next milestone was our 12-week scan, we were so excited and had planned to announce the news to our extended family and friends, but, unfortunately, we received the worst news that the baby’s heart had stopped beating at 9.5 weeks.

It’s hard to explain the shock and grief you feel at this moment, and also the less expected feelings like “What did I do wrong?” and “How did I not know?”

I had what is known as a Missed Miscarriage, where the baby’s heart stops beating but you have no symptoms as your body has not realised that the baby has died. It’s devastating, and also leaves you with the mental and physical trauma of removing the pregnancy as it had not happened naturally.

I wanted to share my experience as, when it happened to me, I felt like the only one, as you usually only see the happy stories on social media.

But I was very surprised to learn that miscarriages within the first 12 weeks happens in 1 in 4 pregnancies – a huge statistic for something that is so rarely spoken about and, still in some cases, shrouded in secrecy.

I am now looking forward and focusing on what I have in life rather than what could have been, which is tough; however, I have found to be the best coping mechanism for me.

I hope sharing our stories helps other people who have been through similar experiences.

When I was pregnant with my daughter, I joined a support group of seven other women who were having babies around the same time. As we got to know each other, we started to share more personal stories of our pregnancy experiences. It was surprising that half of us had experienced a miscarriage previously, at different stages, but the loss and grief was no less real. It just shows how unfortunately common this occurs during early pregnancy, and that you are not alone. It really helped us to talk about it and appreciate how precious life is.

On Sept. 24, we celebrated our daughter Theresa’s 12th birthday. Theresa was born stillborn at 29 weeks. While our hearts have healed, our family still has a missing piece. In her memory:

“An angel wrote in the book of life my baby’s date of birth, then whispered as she closed the book, ‘Too beautiful for Earth.’” – Paper Heart Family

If you have experienced a pregnancy or infant loss, don’t be afraid to ask for help. There are support groups available, as well as online resources. One such resource is the Pregnancy After Loss Support (PALS).

Better Together: “The Promise of Supply Chain Sustainability”

Microaffirmations: How Small Acts Can Build an Inclusive and Empowered Culture at Work

Family or Career? Blue Yonder’s Sandra Lelieveld Says You Can Have It All