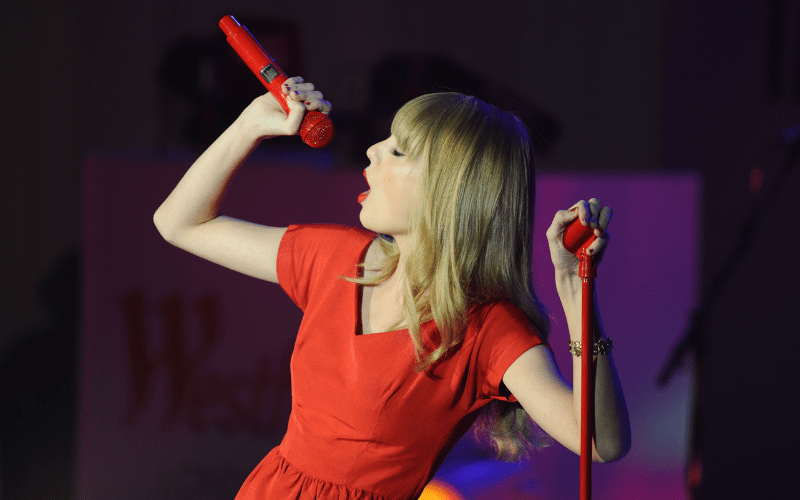 Calling myself a Taylor Swift fan would be a gross understatement. My younger friends would say I’m a stan, but the label I’m most comfortable using for my 16-year obsession with the 11-time Grammy Award winner is that I’m a “Swiftie,” the nickname lovingly donned by millions of other superfans around the globe.

Here’s the thing about us, Swifties — we will defend Tay at all costs. And that’s exactly why I’m here today. So, what has she been accused of, you ask? Mega-stars like Taylor Swift and Adele have been accused of breaking the vinyl record supply chain.

The murmurs started when Swift’s album Evermore sold over 100,000 vinyl albums the week of June 7, 2021, breaking the all-time weekly sales record, while, at the same time, other lesser-famous and indie artists were complaining they had to wait anywhere from nine to 24 months to have a vinyl pressed.

Then, our favorite country-turned-pop crooner announced she was re-recording her album Red — arguably her best — and that Red (Taylor’s Version) would simultaneously be released on digital formats and four LP records. By this point, some artists began wondering if they’d be able to have their own records pressed — ever — with superstars dominating the Billboard charts and all the pressing plants around the world.

I am definitely a big fan of indie artists, and I’m heartbroken that many can’t release LPs like the bigger artists can. But I think the blame might be misplaced here, and that’s why I’m presenting 13 reasons — 13 being Taylor’s favorite number — why Taylor Swift did not cause the vinyl record shortage:

1. Vinyl sales were already on the rise. Records have been re-gaining popularity over the last decade and even overtook CD sales in 2020.

2. The pandemic caused a retail boom for records and record players. With more people staying at home during the COVID-19 pandemic, vinyl sales were up 108% in the first six months of 2021, compared to the same time period in 2020.

3. There is a vinyl pellet shortage. Records are made from vinyl pellets, which are manufactured in parts of the world that were hit hardest by the pandemic.

4. With the lumber shortage, there’s competition for vinyl usage in flooring. Vinyl floors are made from the same materials as LPs, and it’s a heck of a lot easier to sell vinyl pellets to flooring companies instead of record manufacturers.

5. The price of PVC has skyrocketed. The price of polyvinyl chloride (PVC) — used to make records, credit cards, pipes and medical devices — has increased 70% during the pandemic.

6. A disastrous fire at a lacquer disc producer nearly shut down the supply chain. California’s Apollo Masters, the facility responsible for 70-85% of the industry’s lacquer discs needed to assemble master plates for pressing records, caught on fire in early 2020.

9. The logjammed ports are to blame, yet again. In addition to our never-arrived Halloween costumes, guess what else is sitting in those 70-something container ships waiting to be unloaded at the port of Long Beach? You guessed it — vinyl records.

10. Shortages are exacerbated by the demand for different colors. According to Sean Rutkowski, a VP at New Jersey’s Independent Record Pressing plant, colored-vinyl pellets are in such limited supply that he’s had to make calls on 43 releases that were due out before Christmas to tell labels they’d have to change their colors or wait till next year.

11. It makes better business sense to press a bigger artist’s record. Logistically, it’s just easier to press 500,000 copies of a mega-star’s album than 5,000 copies for many indie artists.

12. Big retailers call the shots. You’ve heard about big box retailers sidestepping the global supply shortages by chartering their own cargo ships, right? The same concept applies to vinyl records. Big retailers have big bucks and big buying power to demand enormous volumes of LPs — in exactly the colors they want too.

13. Taylor and Adele still had to wait their turn. Not to downplay the legitimate concerns of indie artists, but the superstars aren’t completely dodging the long wait times for having their albums pressed. Swift’s Evermore may have broken vinyl sales records in June, but the digital format was released six months earlier back in December 2020. And Adele was finished with her latest offering, 30, a year ago — giving plenty of time for the vinyl record supply chain to run its course.

I could go on and on about why Taylor Swift didn’t cause the vinyl record supply shortage, but I’ll stop here at 13 and go hide in a dark room to listen to Red (Taylor’s Version) on repeat for the next few days, weeks or even months. And if you’d like to learn more about other supply chain disruptions, trust me, we know them All Too Well.

Head over to our thought leadership hub to learn the latest insights and how to stay ahead of supply chain trends.

Welcome to the Supply Chain Without Boundaries

Logistics Imperatives to Manage Uncertainty and Disruptions in 2022: Part 2

How Blocking the Suez Could Dampen Summer Demand

The Key to Strategic Workforce Planning for the Warehouse