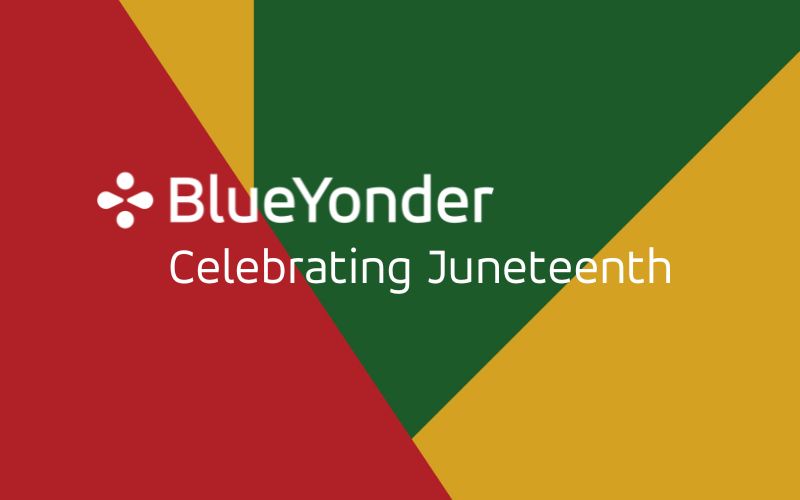 Let’s get comfortable with being uncomfortable. Crucial conversations surrounding the topics of racial injustice, discrimination, and cultural prejudice, continue to ignite. Members of the Blue Yonder community feel the support of fellow associates as they share their personal experiences, viewpoints, and beliefs during the second nationally recognized holiday of Juneteenth.

Juneteenth is a very symbolic date, as this is the date in 1865 that celebrates the emancipation, hundreds of thousands of enslaved Black people in the U.S. They were freed when federal troops arrived in Galveston, Texas, to enforce the Emancipation Proclamation that was issued by President Lincoln on January 1, 1863. Keep in mind that there is a gap of over two and a half years between those dates. July 4th is America’s Independence Day, where America gained freedom from British rule. However, this didn’t apply to Black people, who were still enslaved for another 90 years.

In 2021, President Biden signed legislation that made Juneteenth a federal holiday, falling each year on June 19. The holiday also referred to as “Juneteenth Independence Day,” “Freedom Day,” or “Emancipation Day,” is celebrated among families, friends, peers, and businesses. Parades, festivals, and other organized events are held to commemorate history and the progress made to create a more inclusive world.

Below, a few Blue Yonder associates share what Juneteenth means and why it’s an important day in U.S. history:

“Juneteenth is not only a day that should be celebrated and remembered, but also a day for each of us to learn and reflect. Learning is not about guilt or shame – learning is about taking steps to understand, have empathy, and to know how you can be an ally and impact change. We need to educate ourselves on the systemic delay and oppression that we see echo from this time – freedom did not mean equal, it meant that enslaved people were no longer seen as property. As we’ve seen through the decades since and into current day, there are still many injustices. Juneteenth serves as an opportunity for us to reflect on the past, current day, and the future.” – Amanda Groger, DIVE Program

“While the fact that Juneteenth is now officially recognized in America is a sign of progress and hope, it’s a reminder that freedom and justice have been delayed for African Americans. Understanding the history when we celebrate this holiday is crucial, as we still have a long way to go in working towards racial equality.” – Courtney Armstrong, Associate Success

“Can you imagine being owned and treated as property, until all the sudden a whole army shows up to announce that you are finally recognized as a free person and can be a hired labored instead? Probably not, I know I can’t fathom hearing an announcement of such granularity. Yet that’s how we’ve arrived at Juneteenth. For me, Juneteenth is about celebrating Black excellence, Black culture and freedom overall for all people.” – Jamie Humphrey, Finance

“Juneteenth provides a unique opportunity to reflect on this nation’s gruesome legacy of slavery juxtaposed against our Nation’s continued struggle for all Americans to fully realize all the protections and freedoms guaranteed to all citizens. As a Black American, I’m eternally grateful for the hard-fought battles won in the pursuit of freedom. My reflection regarding slavery isn’t mired in the victimization of Black Americans but rather in their triumph over it. The commemoration of Juneteenth reminds that each day I have an opportunity to commit to solidarity and to focus on the humanity of all people.” – Leslie Martin, Customer Success

“We have so much to learn and unlearn.  Starting with an appreciation for the enormous value and significance of what this day means, why it is celebrated, and why it should inspire reflection and commemoration seems like a great place to start.  Juneteenth isn’t only our history; it is our present.” – Margaret Dantuono-Christensen, Legal

“Juneteenth gives us the opportunity to acknowledge and celebrate the end of slavery in the United States. In order to stick with our commitment to create an inclusive and diverse work environment, it’s important for us to take a moment and recognize the history that’s brought us to where we are. With that said, there’s more work to be done – let’s all be cognizant and consistently listen, pursue learning, and build relationships with those around us.” – Taylor Weissman, Associate Success, Learning & Development

How the Worker Shortage Might Affect Your Summer Vacation Plans

Non-apparent Disabilities: Blue Yonder Associate Sheds Light on What You Need to Know

The Power is in Your Hands