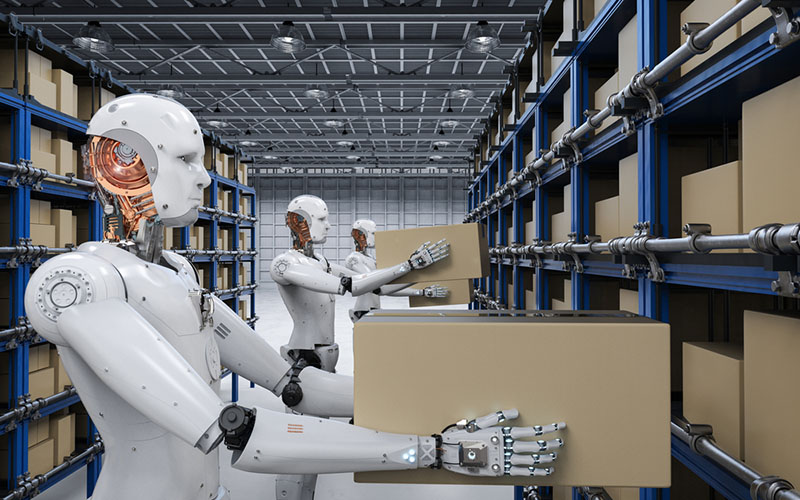 This week: Your next pair of Gap jeans may be delivered with the help of a high-tech robot, why this is the best year to work holiday retail, the Toys “R” Us bankruptcy is going to have a big impact on holiday sales, the demand for warehouse spaces climb as Amazon moves in and Google and Cisco team up in the cloud wars against Amazon.

Futuristic Robots Are Lending Their Hands in Gap’s Warehouse

Your next pair of Gap jeans may be delivered with the help of a high-tech robot. Kindred, a robotics startup whose investors include Alphabet executive chairman Eric Schmidt’s venture capital fund, has signed up Gap Inc. (GPS, -0.51 percent) as a trial customer in one of its Tennessee warehouses. It’s a big win for the three-year-old Kindred, which also said Tuesday that it had scored $28 million in funding led by Chinese tech giant Tencent, bringing its total funding to $44 million. Kindred’s new customer and investment highlights the growing trend of companies like Amazon (AMZN, +0.99 percent) and Target (TGT, +0.14 percent) using robots to move warehouse inventory and track items on store shelves. Several robot analysts cite Amazon’s $775 million purchase of robot maker Kiva Systems in 2012 as a turning point for retailers and other companies, not just automakers or industrial manufactures, in adopting robots.

Why This Is the Best Year to Work Holiday Retail

For holiday job-seekers, Christmas is coming early this year. With a national unemployment rate of 4.2 percent, experts are predicting a hot job market for seasonal hiring, and holiday part-timers might score the biggest bonus of all once the seasonal frenzy wraps up: A permanent gig. “We do see a growing percentage of employers keeping workers on and using holiday hiring as a way to evaluate workers that they then keep on,” said Peter Harrison, CEO of Snagajob. This has advantages for both employer and employee, said Andy Challenger, vice president at Challenger, Gray & Christmas. “For employers, it’s a great way to give people a test run,” he told NBC News. “It’s a three-month interview in some ways,” while workers have a chance to evaluate the benefits, culture and opportunity for advancement afforded to full-time workers.

The Toys ”R” Us Bankruptcy is Going to Have a Big Impact on Holiday Sales, Hasbro Says

The bankruptcy of Toys “R” Us weakened Hasbro Inc’s forecasts for the holiday season in otherwise strong third-quarter results on Monday, boding ill for a sector worried by the collapse of a major customer. The Amazon-fueled move away from brick-and-mortar retailing was behind the surprise filing last month by Toys “R” Us, which left Hasbro exposed to the tune of $60 million in unsecured claims for payment. The U.S. toymaker, which was selling about 9 percent of its total inventory through Toys “R” Us stores, said third-quarter profit rose 3 percent and revenue 7 percent – above analysts’ estimates – even as the bankruptcy began to hurt operations. Hasbro’s estimate for the fourth quarter of an increase of 4 to 7 percent over last year’s $1.63 billion, however, was below Wall Street expectations.

As Amazon Moves In, Demand for Warehouse Space Climbs

For the modest warehouse, this is a golden age. Boxy, unadorned and often overlooked, these properties are suddenly in hot demand in many parts of the country, thanks in part to a rise in e-commerce as consumer shopping habits move online. Retailers like Amazon and Walmart are snapping up space once reserved for makers of office furniture and home flooring. For years now, consumers have been purchasing more products online. In the second quarter, e-commerce sales topped more than $111 billion on a seasonally adjusted basis, or 8.9 percent of all retail sales, according to the Census Bureau. Industry forecasters expect e-commerce sales to continue growing.

Google and Cisco Team up in the Cloud Wars Against Amazon

When Chuck Robbins was promoted to CEO of Cisco in 2015, the company’s technology was in danger of losing relevance. When Google named Diane Greene as head of its cloud division that same year, her unit was desperate to close the gap with Amazon Web Services. Two years later, Robbins and Greene are teaming up to develop and sell cloud technology and services in a whole new way and to take on AWS. On Wednesday, Cisco and Google announced a partnership that will combine Google’s expertise in building massive data centers and open source software with Cisco’s global salesforce, customer support and security. Cloud infrastructure, the technology that allows businesses to offload their computing and storage needs and access their data from anywhere, has become a huge and fast-growing market — and Amazon dominates it.

Fostering a Passion for Food Into a Career in Supply Chain

JDA TV – Are You Ready to be BOLD?

Who Will Win the Self Driving Car Fight between Google and Uber?

Is Your Supply Chain Skating to Where the Puck Is Going to Be?